When In Doubt, Create Your Way Out

Home C4 Ranch News When In Doubt, Create Your Way Out
0   
By Rowlynda Moretti C4 Ranch News Featured Lessons From The C4 Ranch June 1, 2021
When In Doubt, Create Your Way Out
By Dr. Glenn Fox, C4 Foundation Chief Science Officer
Nobody watches a movie without a plot. When we cheer for a character, we cheer for their courage in the face of insurmountable odds, but what exactly are we cheering? I have been thinking about this a lot, and I think the movie characters that we love the most are those that show daring creativity, no matter what they’re up against. One of my movie heroes, Paul Newman’s character in Cool Hand Luke, is faced with an objectively awful situation, yet, he makes his own story out of it, he puts in the effort to make things into a game, he builds camaraderie with his enemies, and he refuses to quit, no matter what.
We all feel stuck sometimes. We can feel stuck by life circumstances, work, family, money, and many, many, other things. We like to think that these sticking points are all that stand between ourselves and complete freedom. To be sure, victories over these hurdles can lead to greater options and choices, but the paradox is that those often only emerge from our creativity.
In my work with entrepreneurs, athletes, engineers, scientists, military personnel, or artists, the thing I see in common with all breakthroughs is that they are defined by their constraints.  In my research on gratitude, we had the challenge of trying to get people to feel grateful in a brain scanner. If you have not been in a brain scanner, it is cold, uncomfortable, and you cannot move more than a couple millimeters. It is certainly not a place where you would think of as a prime place to feel deep emotion. Yet, when we looked at it creatively, we saw a place that was free of distraction, where people could focus on just their thoughts and emotions, and allow the novelty of the setting to lower some of the boundaries to experiencing an emotion deeply. Once we saw the limits differently, the constraints became part of what allowed us to create a meaningful experiment.
We tend to think of creativity in a narrow window, for standout “creative types,” but any time we see a way out of a tough spot, any time we take stock of our resources and do our best with them, we engage in creativity. In fact, researchers define creativity as “adaptive behavior that emerges in response to interruptions to previously successful routines and habits.”So by definition, creativity is the natural response to obstruction. The key is to see the hurdles and obstacles as simply feedback and do our best to seek inspiration from them. As it turns out, maybe freedom is not having unlimited options at all times, but instead is about the freedom to create, obstacles be damned.
Written by Glenn R. Fox, PhD, Chief Scientific Officer, The C4 Foundation 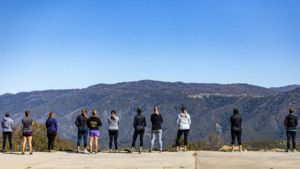